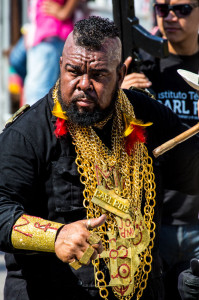 October is quickly approaching and that means it’s almost time for our favorite holiday: Halloween!

What do jewelry and trick-or-treating have in common? On the surface, not much. But if you dig a little deeper, you’ll find people who love bling also provide excellent (and easy) costume ideas. Keep reading to see what we mean.

1. King Midas. No, we aren’t referring to the 80s’ classic by Midnight Star. Instead, we’re talking about the Greek and Roman legend Midas, Kind of Phrygia. Legend says that King Midas encountered a tired satyr named Silenus in his garden. After entertaining Silenus for a week, Midas returned Silenus to his home of Lydia. The ruler of Lydia, Dionysus, wanted to award King Midas for his kindness. Without thinking, Midas asked for everything he touched to turn to gold. Ultimately, King Midas ended up regretting his wish, but the story is legendary. Get creative with this costume and if you end up going out, make sure to take pictures.

2. Mr. T. If you don’t know who Mr. T is, we pity you! This actor and professional wrestler is best known for playing the part of B. A. Barracus on The A-Team, but he’s also appeared on dozens of other shows, movies, and television commercials. Aside from his mohawk, there’s one thing that sets Mr. T apart: his affinity for thick gold chains. All you need for this costume is a cut off shirt, a flat-top mohawk, a goatee, and some serious bling.

3. Kanye West / Lil Jon. Kanye West and Lil Jon are well known for their Gold Horus and Crunk Chain respectively, but any modern hip hop star is worth considering. To access a complete list of chainspiration, click here.

Have fun this Halloween and make things a little extra shiny. If your costume is bling-inspired, share your photos on our Facebook or Twitter page. Happy haunting!