Worth its weight in gold: How precious metals are measured 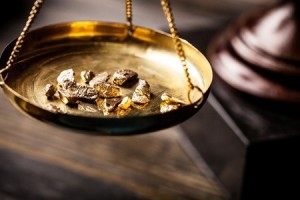 Confused about how gold — and precious metals, in general — are weighed? Most people are. The precious metals industry actually uses three units of measure: troy ounces, grams and pennyweight. Each type of unit is used under different conditions. Here’s what you need to know about each:

Troy Ounce. The troy ounce is a unit of imperial measure commonly used to measure precious metals. One troy ounce weighs exactly 31.1035 grams and exactly 20 pennyweight. (The Avoirdupois ounce — or everyday system of weights used in the United States —is equal to 28.349523125 grams and 18.229 pennyweight. This makes the troy ounce about 10 percent heavier than the everyday ounce. What’s important for you to know is that anyone buying precious metals from you using the regular type of ounce is actually shortchanging you. They are paying you for 28 grams and 18 pennyweight as opposed 31 grams and 20 pennyweight for your gold.

Pennyweight. The Pennyweight (abbreviated as DWT and derived from the Roman unit denarius) is another unit of measurement used for precious metals, but is more commonly used in scrap gold purchases and in measuring the amount of metal in jewelry and dental fillings. It is usually not used in measuring precious metal bullion and coins. Instead, bullion and coins are measured using the Troy ounce unit of weight. It takes exactly 20 pennyweight to equal one troy ounce but only 18 pennyweight to equal one avoirdupois ounce.

Want to learn more? Come to the Hawaii Gold Buyers Exchange. We love answering your questions!